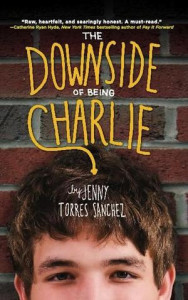 Charlie isn’t your typical YA protagonist. He struggles with his weight, to the point that he develops bulimia. He doesn’t excel socially, in sports or any other way at school until he discovers photography. Charlie’s life is atypical in many ways. He’s an only child with an emotionally damaged Mom who leaves and returns on a whim and a father who is embroiled in an affair. Throughout the novel Charlie is not only tending to his own needs, but he is also trying to predict the mood of his parents and what their needs may be. As dark as the story sounds, I fear that such conditions are a reality for many teens and the rendering of Charlie under the gentle hands of Jenny Torres Sanchez is both gentle and honest. Charlie will not win any awards for being the most loveable character in YA fiction. He has an undying crush on a pathetically shallow girl, he selfishly locks himself away from his Dad and he participates in bullying an easy target at school. I found the complexity of his imperfections refreshing, even if they are painful to read about. Although, like life there are many components to the story it is at its root about Charlie admitting that he has an eating disorder.
"But the truth is, it’s hard to constantly have to admit how screwed up my family is.
It’s hard to constantly need to be saved.”
At the beginning of the book Charlie has just returned from fat camp and although he likes the way that he looks, he is also leery of the new attention that he is receiving due to his new physique. He gets attention from the girl of his dreams, Charlotte and his desire to be appealing to her mixed with the emotional chaos that he experiences over his mother’s condition and his father’s indiscretions push his eating issues into overdrive. He begins a dangerous pattern or binge and purge that accelerates as the story progresses.
I find Charlie’s innocence endearing rather than unrealistic. Not all kids mature at the same rate. For example, he has never been in a girl’s room before. He has no sisters, cousins or friends with sisters and when the first room that he ever sees is the room of his love interest Charlotte VanderKleaton. Charlie has a quirky best friend Ahmed who is obsesses with the Rat Pack and a caring teacher Mr. Killinger who keeps Charlie motivated during difficult times.

Besides the effective narrative there are many hidden layers in the book that can be dug through. This would be an excellent book to write a paper on, is a worthy tool for any teen struggling with an eating disorder and is just a worthwhile read overall. I’m anxious to see what comes next from the promising new writer Jenny Torres Sanchez.

Tags: jenny torres sanchez, the downside of being charlie
Subscribe